Non-Solicitation vs. Non-Compete Agreements in Canada and the US (Updated 2020)

No matter how great of an employer you are, you’ll likely still experience some employee turnover. Some people may leave for other opportunities, while others look to start their own businesses. When they leave, they take with them confidential information, which could mean your business loses a competitive edge in the market.

Given this, it’s not unreasonable for an employer to think about putting limits on what employees can do after they leave the business. In employee contracts, there are two types of clauses used to achieve this: the non-compete clause and the non-solicitation clause.

What’s the difference between the two, and which one should you use? This guide will help you understand the basics of these complex legal agreements.

A non-compete clause is an agreement between yourself and the employee that they won’t compete directly with your business for a certain period of time after their departure. This usually means they can’t start a business that’s similar to yours. They may also not be able to work for your competitors or other, similar businesses.

Non-compete agreements can become quite complex, and they’re not always enforceable. The rules between Canada and the US are different at the federal level. They can also change province to province or state to state. What’s legal in one state may not be enforceable in another.

In California, for example, non-compete clauses are only valid in very specific legal situations. A company can prevent current employees from moonlighting for their competitors. A buyer can also prevent a seller from forming a new business to compete with them.

In Florida, on the other hand, non-compete clauses are generally enforceable. They must protect the business’s legitimate interests, as well as have a geographic area and time limitation.

In Canada, non-compete agreements can be rather difficult to enforce, as courts have decided that it can be overly restrictive and doesn’t serve the best interest of the employees. It’s important to do your research and see what kind of agreement might better serve your purpose.

A non-solicitation clause means the employee agrees not to lure other employees away from your business. They also cannot engage your clients once they leave. Unlike a non-compete agreement, your non-solicitation clause is much easier to enforce as long as you make absolutely sure that it is clear, reasonable, and completely unequivocal in the eyes of the law.

As a result, a non-solicitation agreement is a generally more popular option for many companies. It’s usually more agreeable to employees as well, which makes it easier for everyone.

Non-solicitation is often paired with a non-compete agreement in the United States to ensure that not only is your worker not allowed to open up a business in direct competition with you, but that they are also unable to try to steal business or assets.

Canada is a different story. Non-solicitation is a more common option due to the difficulty many businesses have with enforcing non-compete agreements. Most of the time, courts will enforce a non-solicitation agreement to prevent any poaching on the part of a former employee.

It’s generally unwise to include a non-competition clause in a Canadian employment agreement. An employee might take you to court over the restrictions, and the court might decide you aren’t able to enforce the agreement.

Both you and your employees may find the non-solicitation clause easier to work with and fairer overall. Your employees are less likely to take you to court over it. In the event someone does start a suit, the court is more likely to side with you and allow you to enforce the clause.

In either case, it's best to employ legal minds before you decide to offer any sort of clause. Getting the advice of the experts can ensure you’re not only compliant with the law, but that both parties are covered in a fair manner. 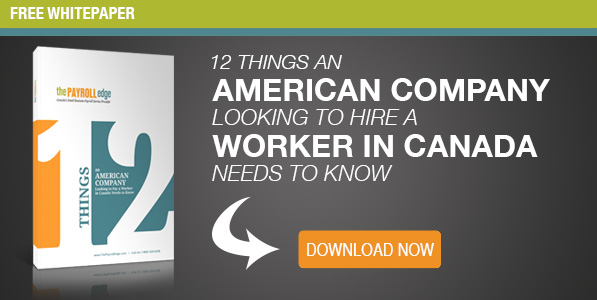 Shannon Dowdall is a business development specialist at The Staffing Edge. She brings 10 years of extensive customer service and sales experience to her role. Shannon studied business marketing at Sheridan College and proceeded to work in the hustle of the fitness industry as a sales and marketing manager selling commercial fitness equipment. Passionate about sales and marketing and having grown up in the recruitment industry, the move to The Staffing Edge was a great fit. Shannon enjoys working with new potential members to help them discover how we can help put them on the path to prosperity and focus on the future, without all the worry that comes with owning a staffing company. In her free time, she enjoys being active outdoors by playing soccer, skiing and snowboarding, and hiking. The Staffing Edge works seamlessly with our members and Shannon makes sure all new members are equipped with the information and tools they need to move forward with a “business edge.”

Looking to Pay a Worker In Canada Needs to Know